A ball joint is an essential section of the suspension in your car, and it is available in all modern vehicles. Furthermore, a ball joint is a spherical bearing placed in a mechanical socket. It also functions in the sawm way as the ball and socket structure of the human body. In modern-day vehicles, the ball joint acts as an essential pivot point the connects the control arms of the car to the steering. The front ball joints allow the front wheels and suspension to move in various directions, thus providing optimal car movement.

The ball joints are hinges for the wheels on your vehicle. Any failure in the performance of the ball joints would mean that the wheel would fold into the finder. This is not good if it occurs when you are doing 100mph on the freeway. In the mean, there exist two or three points that help to hold the car’s position in the alignment. If there is a compromise in the performance of these points, then the car alignment will get affected.

The wheel won’t move straight, and this will have various other side effects on the performance of your car.

What Happens When Ball Joints Go Out

The ball joints are designed to help maintain the position of your vehicle against the road as the suspension moves up and down. One ball joint exists on the farthest section of the lower and upper controls arms. Also, the ball joint also connects the car controls arms to the steering, on either part of the vehicle. That said, these are components that are prone to damage over time and might require replacement. The common issues associated with bad ball joints in your car include

A worn-out ball joint will cause the wheels to move in almost any type of direction and relation to the fore of inertia. Furthermore, the wheels will maintain the same position until the force directs them elsewhere, which can affect car motion. A bad ball joint might also reduce the lifespan of your car tires. Thus, ensure that you maintain the quality of ball joints in your car to avoid any such issues. Increased tire wear means that you have to spend more on replacement parts.

In some cases, the ball joint in your car can easily lock up. When it locks up, the motion that it usually absorbs does not go away, and this has adverse effects on the car performance. Thus, the motion has to be transferred to another component, which was not initially meant to absorb such a force. The component that is forced to accept the unusual motion due to the ball joints would be the control arm bushings. Usually, the bushings are made using rubber, which gets damaged easily.

If you reside in places where cars have to surpass specific mechanical standards, then your car is likely to fail various tests. Performing these tests is usually an important part of various road safety standards and it’s imperative in some states. The owner should well maintain a safe car, and be free from issues such as ball joint failure. Thus, ensure that you evaluate the performance of the ball joint in your car, to ensure optimal performance and compliance on the road.

By far, the worst side effect of a worn-out ball joint would be complete breakage. Complete damage is likely to cause accidents. The ball joint can break in various ways. First, it might detach from the socket and study. Regardless of the type of breakage, the end result is usually appalling. In fact, any damage to the ball joint means that the wheel of the car can move in any direction. Such an issue can affect your ability to maintain optimal control of the vehicle as you drive on the road. 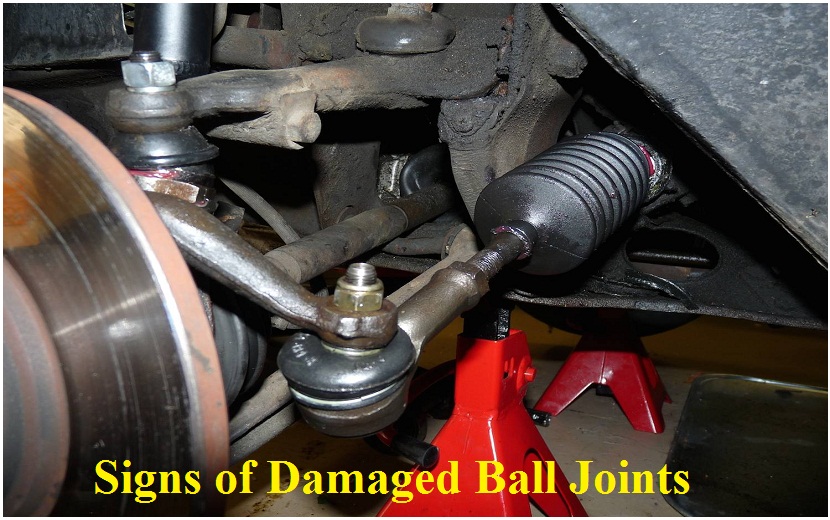 When the ball joint experiences damage, the motion of the wheel becomes compromised. Such an issue can have adverse side effects of the car tire, suspension components, fender, and more. In most cases, when the ball joint reaches its end of life, it will display various symptoms. Among some of them include.

If you notice that the inner or outer sections of the car tire are wearing down faster than the entire tread – then ball joint failure might be a principal cause. This sign can be challenging to decipher, especially if you come across other signs of compromised ball joints. Thus, ensure that you also evaluate your tires for uneven wear. Tire wear must occur evenly on the tread. Any uneven tire wear leads to various secondary issues. These include problems such as the increased likelihood of accidents and the cost of car repair or maintenance procedures.

Since ball joints are essential aspects of your car`s suspension, any issues to their structure can lead to immense car damage. Thus, the handling and performance of your vehicle are likely to become compromised. Furthermore, if you also suspect that the joints have become worn or need replacement, then consider getting in touch with a professional service. What is the role of a ball joint?

The ball joints play the role of connecting the arm to the knuckle of the steering. More so, it also works as a pivot point between the suspension and wheels of the vehicle. Most front suspensions on cars have upper and lower ball joints on each section. To be specific, the lower ball joints are typically larger and experienced increased wear due to the excessive weight of the front of your car.

Replacing ball joints might not be part of regular car maintenance, that said, consider performing replacements based on your manufacturer’s recommendations. More so, consider evaluating the ball joints at every oil or filter service session. Usually, most ball joints in vehicles are well sealed, and might not require greasing. However, some ball joints might still require regular greasing and changing of oil filters.

What are the common bad ball joint symptoms?

When the ball joint reaches its end of life, then you must perform a replacement. Other symptoms of a replacement would be issues such as clunking noises, or uneven tire wear as it also affects the suspension. The car might also require alignment after the components of the suspension are replaced to provide optimal tire wear.

What are the common ball joint replacement costs?

While the average cost of a ball joint varies from different car models to models, the costs average between $200 and $1,000. The higher-end prices come about due to the fact that the car might require additional alignment. Some cars comprise of only two lower ball joints, while other car brands have as many as four ball joints. That said, it’s not necessary that you replace all these joints at the same time.

There is no room for poor decision making or inadequate improvisation when it comes to car care. Components such as the ball joint require regular care because they play an essential role in the performance of your car. You can easily tell if the ball joint has experienced damage by listening for clunking noises or physically checking the underside of your vehicle. However, If you are a novice at car repair, consider calling a professional car repair service. Failing to address a damaged ball joint on time can easily lead to secondary car damage, and even cause car accidents.

What Happens When Ball Joints Go Out (Video Overview)